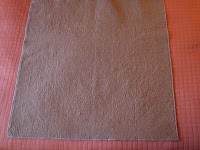 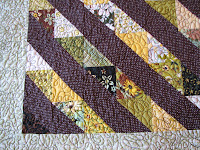 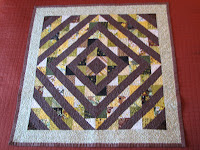 Hooray! I have finished my quilt at last. I started this project in March hoping to figure out a new trick for making pin wheels that I learned from a video on Youtube. Believe it or not this quilt originally started out as pin wheels blocks, but after accidently sewing the block together wrong twice I decided to make it into diagonal rows, but then I once again sewed the wrong side together and realized it made another square shape. There are actually squares in side squares and triangles on this quilt. The fabrics I used for this quilt are a "Origens" charm square pack (42-5"x5" squares) by designer Basic Grey, a pal green/white print from JAF (Joann's Fabrics) and a brown/white dots fabric also from JAF. I did a meandering loop stitch for the quilting, which holds everything together quite nicely. Another adventure in using charm squares to make a project. First Project down in the challenge and time to take a nap!
Posted by Foolish Feathers at 10:45 AM

I love to hear from my readers!